Note: best 3 scores are counted for the grand prix scores in the "Total" columns. Tied players will be ranked in order of their fourth (non-counting) scores.

Congratulations to North Shore player Winston Yao, who picked up a gold and a bronze at the Commonwealth Karate Championships! 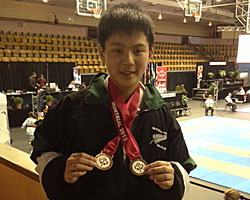