The anticipated upcoming transition to Level 2 restrictions will not affect the current position for chess. No official NZCF over-the-board chess tournaments or NZCF/FIDE rated games will take place in New Zealand in Level 2. Two further upcoming tournaments have now been cancelled: the New Zealand Junior Championship, and the North Island Championship, both scheduled for this July.
Because chess is a game where the players sit indoors in close proximity, over lengthy periods, NZCF Council takes the view that New Zealand needs to move to Level 1 before official tournament competition can resume.

North Shore CC therefore remains closed for the time being. Note that our venue is also unavailable until restrictions ease.

North Shore CC now has a presence on LiChess. If you wish to represent NSCC in NZCF or other online events, please register: North Shore Chess Club - Auckland NZ team.
Please be aware that over-the-board chess will require a relaxation of social distancing rules and is unlikely to be possible for some time yet.

Announcement from the NZ Chess Federation

In view of the COVID-19 virus situation, and in line with New Zealand Government advice on preventing transmission, the New Zealand Chess Federation Council passes the following resolution:
1. All NZCF Regional Interschools events for 2020 are cancelled until further notice
2. NZCF does not sanction or support the staging of any tournaments in New Zealand until further notice. Any such tournaments that take place will not be rated or recognised by the Federation, and no such events scheduled prior to 30th June shall be advertised on the NZCF Calendar.
3. NZCF strongly advises all Chess Clubs, whether affiliated to NZCF or not, to suspend activities.
It is with great regret that NZCF Council takes such a step. As chess is a game where the two players sit in close proximity of each other for lengthy periods of time, NZCF Council feels it appropriate to err on the side of caution in these unprecedented times.
NZCF Council will review the position at the end of June 2020.

The club committee has decided that we should close the club for a few weeks to assess the virus situation. Over-the-board chess is a high risk activity for virus transmission. Other clubs (ACC, Hamilton) have already closed.
Our AGM will be postponed. We hope to be able to re-open for the start of the scheduled Rapid (8th April) but that will be subject to review. Further information will be posted here. If you have any queries, please contact Helen Milligan, email heligan@heliganchess.nz.

NOW HALTED
Up to 2 half-point byes may be taken (though not in the final round) if requested in advance. Players who do not turn up and give no warning will get no points. Email Helen Milligan, email heligan@heliganchess.nz.
Follow on Vega: Summer Cup

North Shore Chess Club hosted GM Dejan Bojkov for a Simultaneous Display. 34 players took part. Tony Carpinter benefited from a rare blunder by the GM, and won. Ceferino (Jun) Isaac also won. Daniel Johns scored half a point, and in the last game to finish, Lucase Yang also held the GM to a draw. Special book prizes were awarded to Allen Li (who had the GM on the ropes for a while) and David Zhu.

1st= David Evans and Daniel Johns
Full results on Vega (please note that the colours and the order of rounds are not necessarily correct, as the Vega file was constructed after the event).
Lightning Tournament 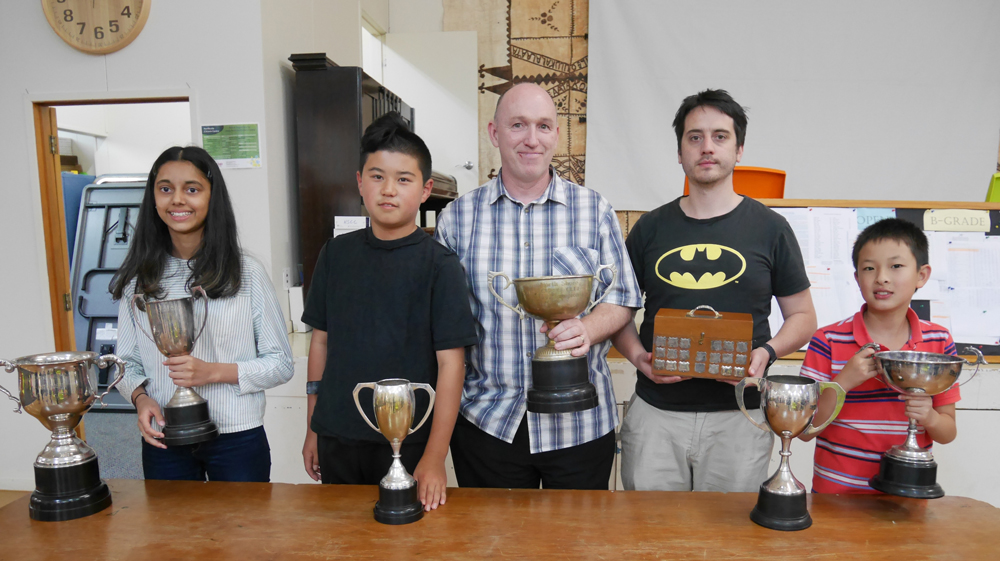 The North Shore Chess Club was founded in 1956 and has been supporting chess on the North Shore and the Auckland region since that date.

From our current premises in the Northcote Senior Citizens Association Hall, on the corner of College Rd and Ernie Mays St, we hold our club nights every Wednesday, from early January through until mid December. Organised tournament play starts at 7.30pm, but casual visitors can sometimes find an opponent. If you would like to know more, please contact the Club President, Helen Milligan, details listed below, or just turn up!
We also run a junior tuition night on most Fridays, starting at 7pm. This is aimed at junior players looking for some guidance & tuition.

This is the venue. There is plenty of parking available nearby. 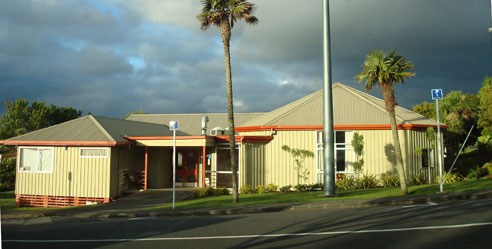 Events are scheduled throughout the year. The annual subscription is $80 (schoolpupil $50; $30 if playing only in the Junior Club).

Friendly games and cake on the last club night of the year.